The City as Engine

(original broadcast, August 21, 2012, on NPR All Things Considered is here)

On the roof you can literally hear the city acting like a giant engine.

The sounds of traffic, music, construction and sirens all merge together into a cacophony, into a clamor, into noise. But what is noise in this case? It's an acoustic measure of the second law at work. It's the city's entropy made audible!

Every moment of every day, vast quantities of energy stream into the city through all that plumbing we saw on the street. The city then uses that energy to do work, to organize itself into vast architectures of order. But the second law will not let the story end there. Waste, pollution and disorder must follow.

There is a word that applies to the sound of cities which almost never gets applied to nature: "Din." The din of cities heard on the rooftop as a rising wall of noise is a testament to the true nature of cities as engines of organization and dynamos of disorder.

The first time I became aware of this din of acoustic entropy, I was sitting across from Manhattan on the cliffs of Weehawken, N.J. It was night and the great city was blazing from horizon to horizon. Its low rumble of noise flowed like a breeze blown at me from a mile away across the dark river. There it was, the second law made real in sound and light. The great might of that city — its vast converging streams of energy, creating a singular nexus of activity — was no more stunning than the visceral realization that it was also radiating disorder like a mad star.

Millions of Americans will travel to national parks this summer and surround themselves with sounds of birds, waterfalls and motorcycles. Motorcycles are one of the largest contributors to noise pollution in the parks and the park service is starting to listen in.  NPR report is
here.

Preserving the Noise of Old Gadgets

June 9, 2012 Weekend Edition Saturday host Scott Simon talks with Phil Hadad and Marybeth Ledesma, the creators of a new website called the Museum of Endangered Sounds. Their aim is to preserve the noises of obsolete gadgets.  The original NPR report is here.

Fed Up With Noise 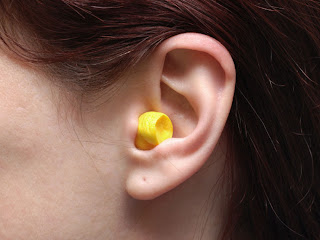 May 31, 2010 George Michelson Foy stood on the platform of a New York City subway station, battered by the noise of trains, crowds and traffic. Suddenly, he couldn't take another minute of the din.  Original NPR report is here.